On the remote northwestern coast of PEI in 1987, a 26 m long mature female blue whale died and washed ashore near the town of Tignish.

In hopes of preserving the whale’s skeleton for research or museum display, the PEI government and the Canadian Museum of Nature arranged for the skeleton to be dragged off the beach near Nail Pond, and buried. The remains of the whale were longer than two Vancouver trolley buses parked one behind the other, and weighed an estimated 80,000 kg. Her burial was a mammoth task. 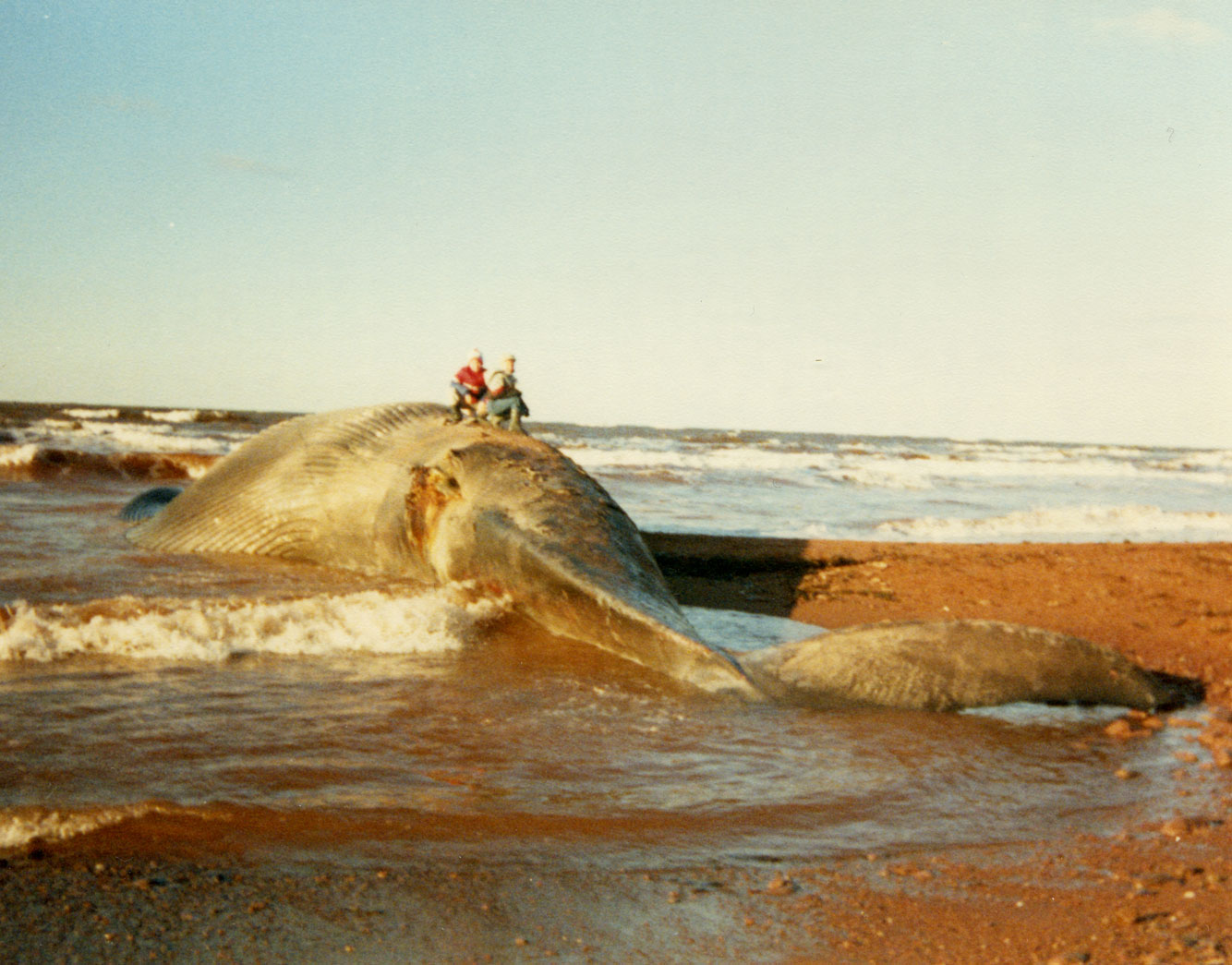 In mid-December, the Museum sent a team of four to PEI to investigate the condition of the blue whale skeleton buried at Nail Pond, and determine if recovery was possible. They planned to find the whale carcass, excavate the burial site, and remove a few bones, to check their condition. 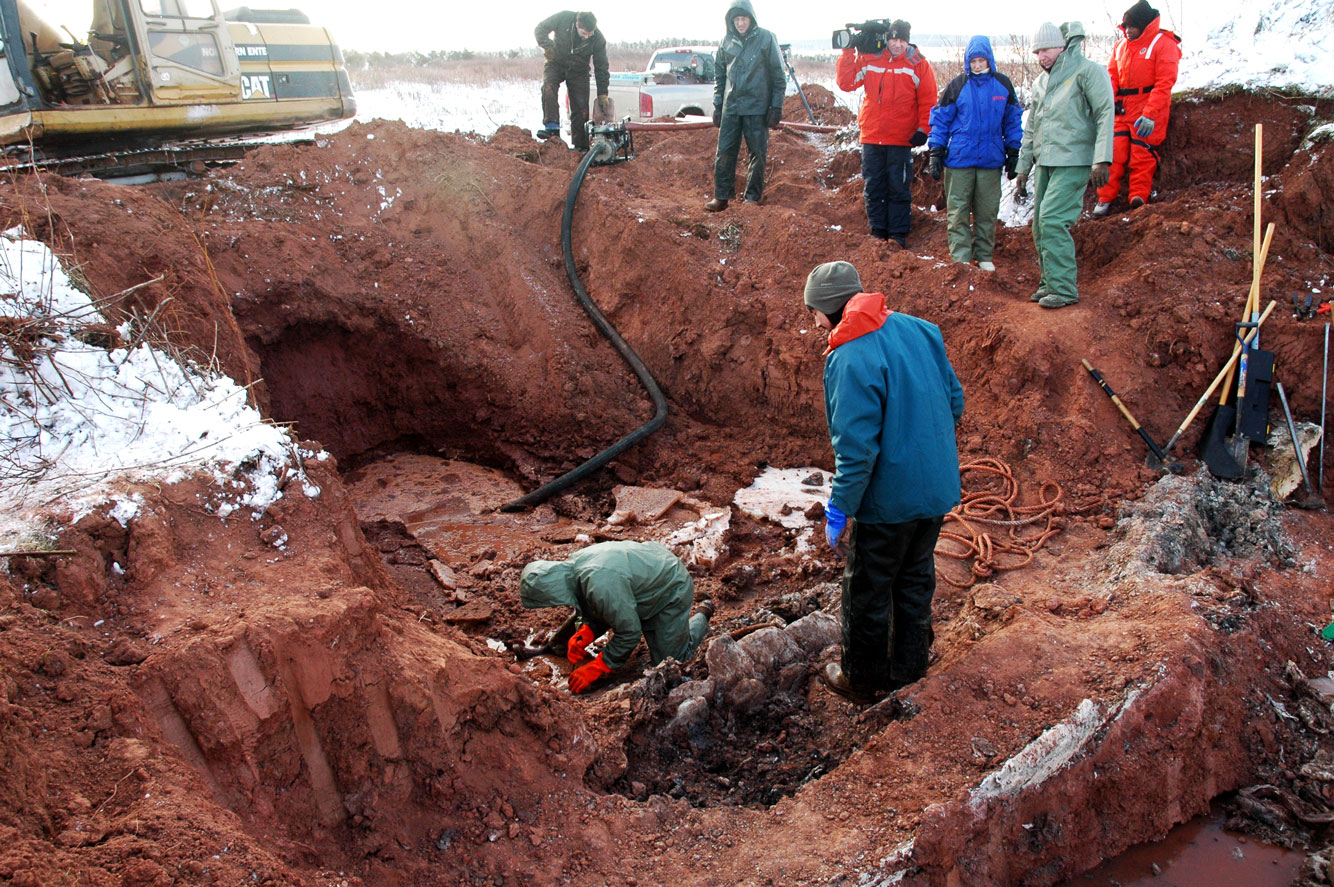 In May, an expanded team of UBC researchers and affiliates headed to PEI to retrieve the entire blue whale skeleton. First, a trench alongside the whale was dug with an excavator. Using shovels, pickaxes, and other tools, the team exposed the carcass and peeled away the remaining skin, flesh, and blubber. The bones were removed, cleaned, labeled, and packed in a refrigerated container from CN rail.

Whale bones are extremely porous. Up close, some areas look like giant sponges. The whale bones are filled with oil in living animals, which helps with buoyancy. Over the 20 years the whale was in the ground, this oil had gone rancid and smelled terrible. The oil would need to be removed before the whale could be put on public display. The removal of this oil was the degreasing phase of the project.

Mike deRoos, the Blue Whale Project’s Master Articulator, and his team removed the whale bones from the cargo container that brought them across the country. The bones were moved to large, specially-designed degreasing tanks built in a space generously donated by Ellice Recycle Ltd. on Victoria’s inner harbour. The team sprayed the bones with degreasing enzyme, a biological agent that helped to break down the oil molecules. The bones were then immersed in 2,500 gallons of liquid containing a type of bacteria that could further digest the oil. This procedure removed the majority of the whale oil from the bones over a period of several months.

In November 2008 team of UBC microbiologists, joined by a camera crew from the Discovery Channel, visited the degreasing site to asses the state of the solution in which the whale bones were soaking. The UBC contingent consisted of Gary Lesnicki, from the Michael Smith Labs, and Doug Kilburn and Tony Warren, retired UBC professors. As part of their recommendations, the temperature of the solution was raised, and the rate of extraction of the oil increased dramatically. Later in the next year, some of the larger blue whale bones underwent a vapour degreasing process.

This procedure extracted remaining traces of oil from deep within the bones by exposing them to a vaporized degreasing enzyme. The jawbone was so big, it had to have a custom tank built for it. 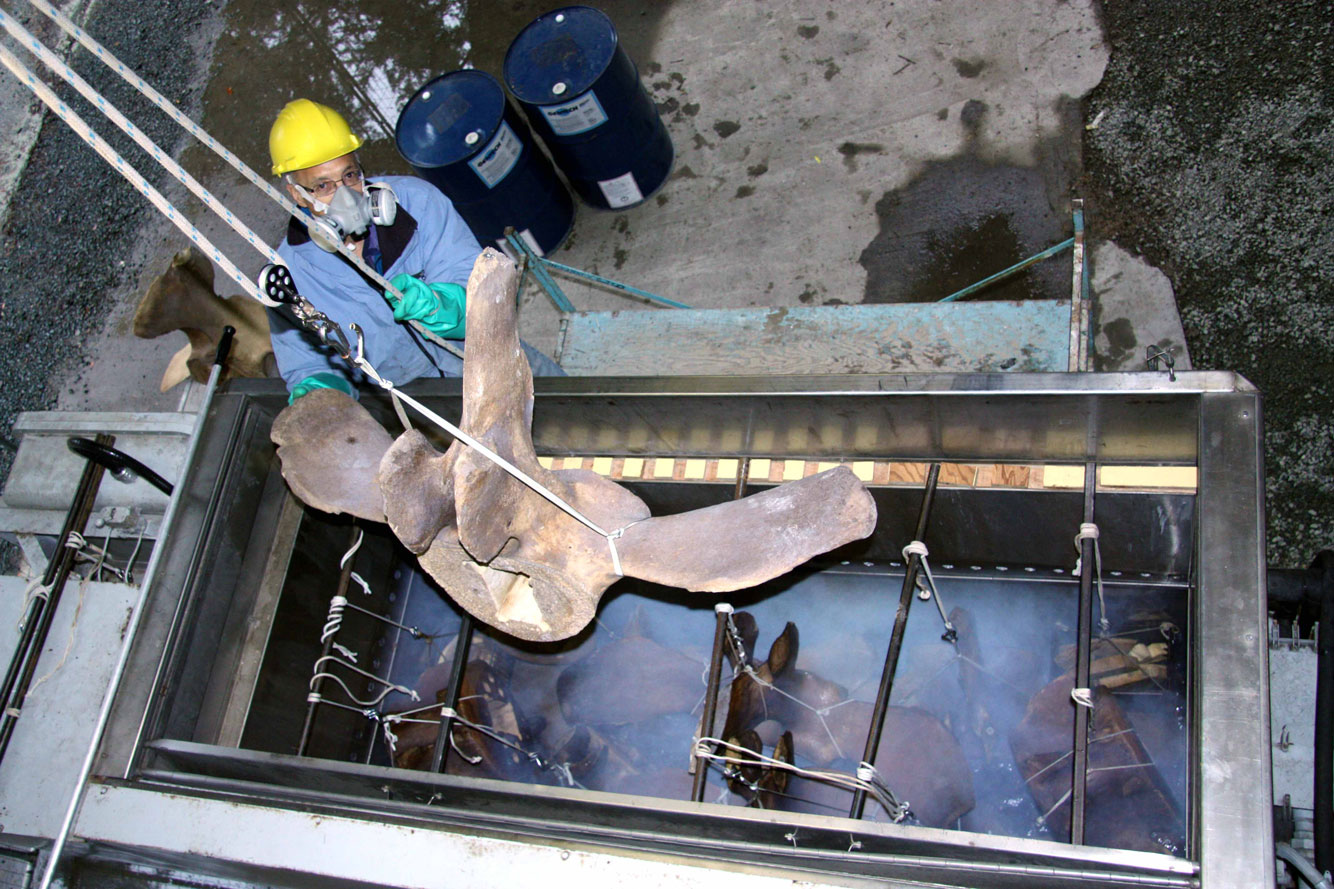 As the bones made their way out of the enzyme baths, the workshop became a much more interesting (and less smelly) place. The articulation phase involved bone repair and casting, and putting all of the pieces together. Mike deRoos, our master skeleton articulator, roughly arranged the first bones out of the bath to get an idea of how to piece the skeleton together.

As the workshop got into gear, the team were happy to welcome field trips from schools and educational organizations, as well as the general public during several open houses. In June of 2009, a class of Grade One students from Frank Hobbs Elementary visited the Blue Whale Project Workshop. 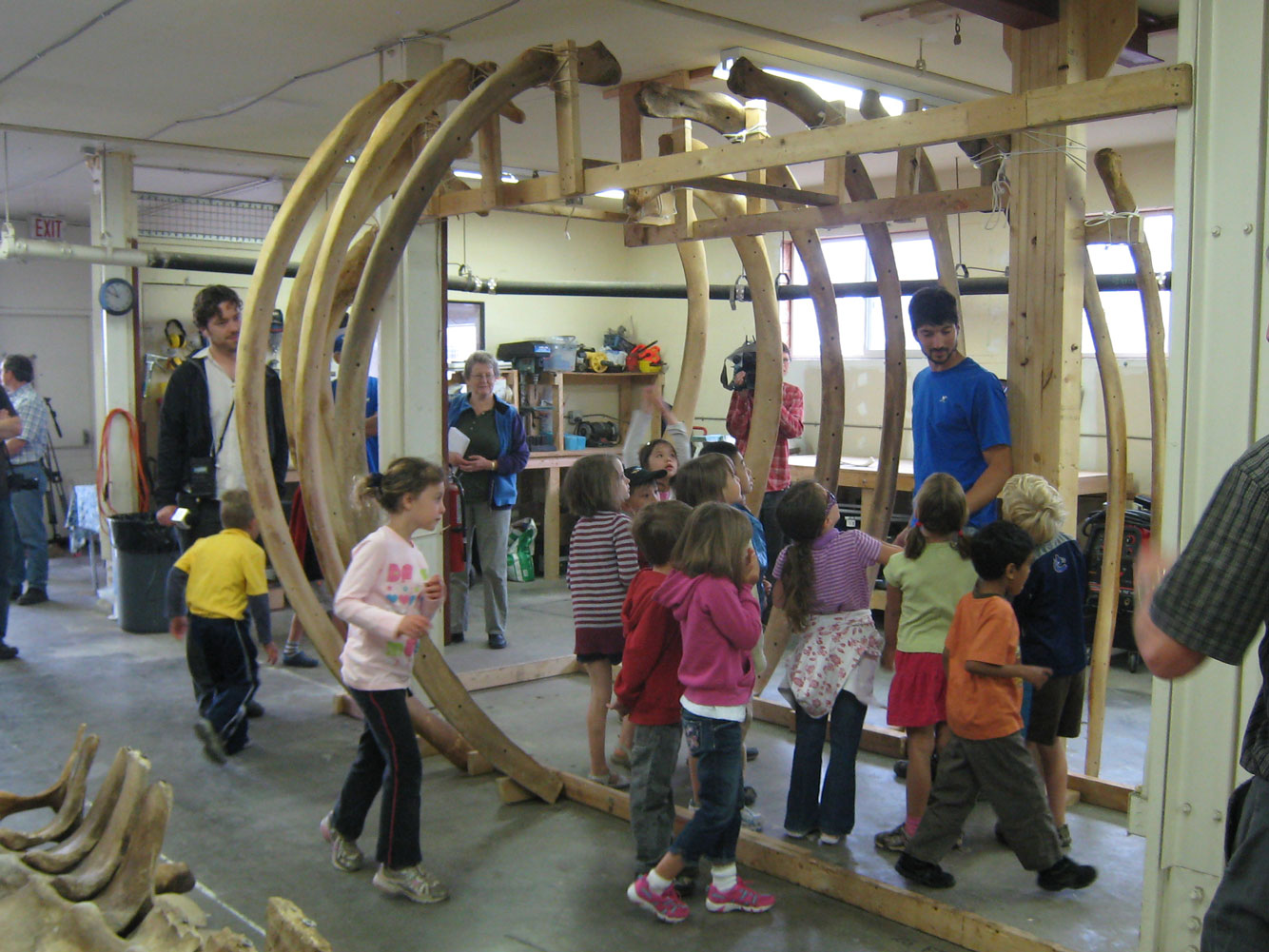 The Blue Whale project team completed articulation at the beginning of April 2010. The whale’s massive skeleton was packed up and safely taken for her final voyage at sea with the help of VanKam Transport and BC Ferries. She arrived at UBC on April 7, 2010, almost exactly two years after she was exhumed in PEI.

The team began the installation on a good note, managing to squeeze the nine large articulated sections of the skeleton (four sections of vertebrae, the skull, two jawbones and two flippers) into the atrium without an inch to spare. Before they began suspending the skeleton, all the pieces were scanned by NYX Dimensions to create a digital copy of the entire skeleton. This information is unique and will be valuable for research and interpretation.

Sections were lowered to a staging area in the lower level of the atrium. The team then hoisted the sections to their final positions working from skull and jawbones back toward the tail. Once in place, permanent stainless steel cables were installed from custom fabricated attachment points in the skeleton to pre-installed u-bolts in the ceiling of the atrium. Even though the team had tirelessly worked with the bones every day for almost two years, this was the first time anyone on the team had seen the skeleton in her entirety since PEI.

The talented crew of articulators, painters and sculptors joined us to complete the finishing touches on the skeleton and she was ready for the crowds who attended a great first blue whale preview event on May 22, 2010. The completion of this blue whale skeleton was a truly collaborative accomplishment for everyone involved from coast to coast and the team and Museum are thankful to all of the amazing supporters, donors and volunteers who made it a reality. 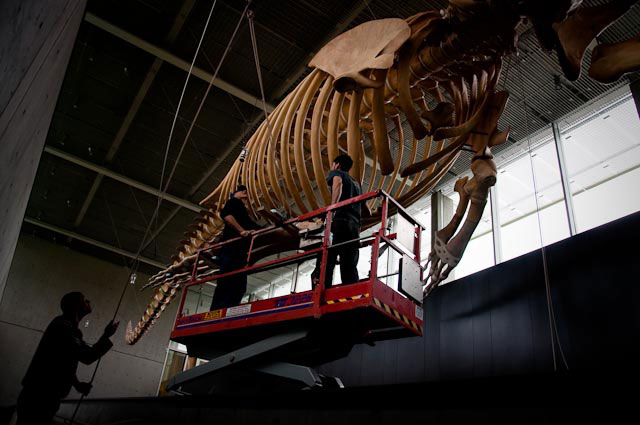 The whale skeleton is on permanent display at The Beaty Biodiversity Museum. At 26 m long, it is the largest blue whale skeleton on display in Canada, and one of only 21 worldwide. 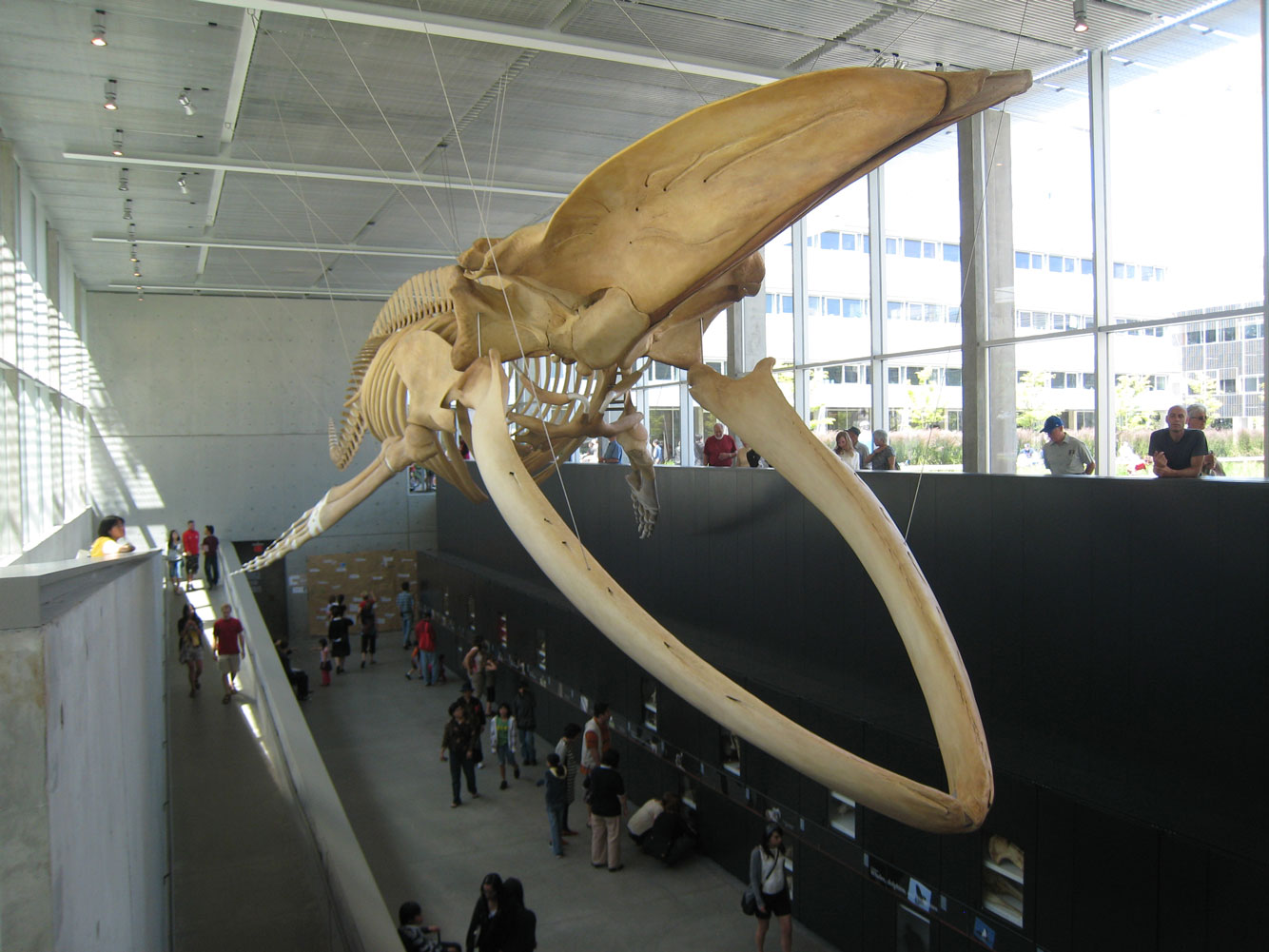